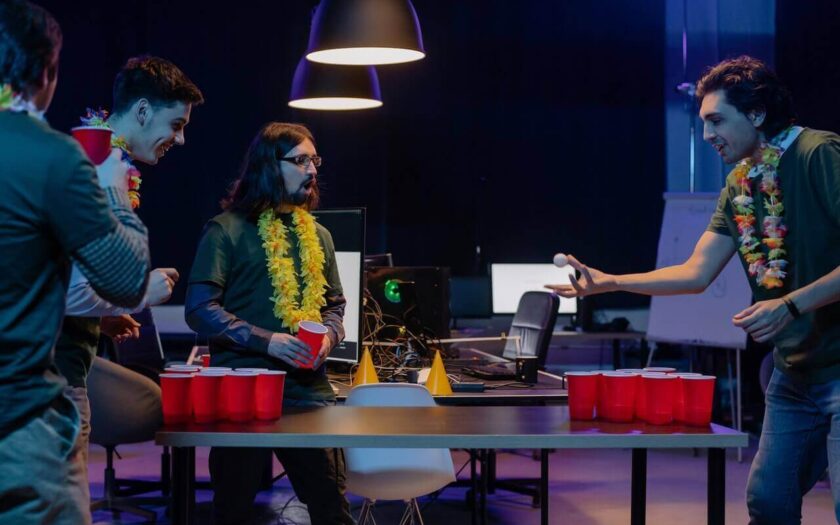 Do you know how to play beer pong drinking games?

Whichever category you fall in, no worries! We will guide you through it.  Even if you haven’t played it before, today, you will know everything about it: what a beer pong drinking game is, its rules, and how to play it.

Beer pong is a fun and popular drinking game. Whether it is a birthday party or a gathering, you will love playing it. It is perfect for enjoying your weekend. By the way, it is very easy and has simple rules. So, within a few minutes, you will understand how to play it.

Moreover, the beer pong drinking game is an excellent pastime. Even if it has its own standard rules, you can create and add your own to make it more interesting.

However, good accuracy is needed to win this game. If you have a nice aim, then you might just win every round easily whenever you play. So, get excited and beer pong!

What do you need to play beer pong?

The basic things you require are:

Cups: Usually, 20 cups. However, it depends on you. If there are more players, add as much as required. If they are disposable, then even better.

Alcohol: Choose any alcohol of your preference. However, it’s not mandatory and alcohol can be replaced by juice, soft drinks, or water.

Players: Basically, a beer pong is played one-on-one or two-on-two. However, you can add as many players as you like to make it more interesting.

Balls: 2 ping pong balls for each side.

First, divide players equally in each team. If you are playing with a total of four players, divide members equally as two on two.

After that, stand beside the rectangular table. Now, place 10 cups each at both ends of the table. Set them in the form of a pyramid, starting from one in the first row, second in the second row, third in the third row, and four in the fourth row.

The endpoint of each pyramid of both teams should face each other. You can also place more cups if you want.

Now, fill each cup with alcohol or any drinks of your preference.

Then, decide which team throw the balls into the cup first. So, how do you do it?

One player from each team throws a ping pong ball into the cup. They get one turn each. However, they have to look at each other’s eyes when tossing. The team to score goes first. If they both miss, either they or the following players continue it.

What if both players successfully throw the ball into the cup? In such a situation, the next member from each team tosses the ball. It continues until the team to go first is decided. It is the standard way to find who goes early.

You can also prefer other ways, like tossing a coin. Sometimes, people also play rock, scissors, and paper. If you have any other methods than these, then you can do that as well.

The beer pong drinking games’ objective is to eliminate opponents’ every cup and make them drink. The faster you do it; the sooner you win the game.

First, both the players from a team get two ping pong balls. They go in turn and throw the balls into the opponent’s cup. If they miss, it is your team’s turn. If both of them score, then they are allowed to shoot again.

You have to remove the cup from the pyramid if the ball goes into it. But before that, you need to drink the alcohol. However, there is an advantage to the throwing team. If they are successful in sinking the ball before the opponent drinks, then the game ends there.

You have two ways to throw the ball. Either you can directly toss the ball into the cup or bounce off the table to score.

Directly tossing the ball only lets you remove one cup. But bouncing provides you two cups advantage: one which the ball goes into and the other is decided by the opponent.

But the game doesn’t end when a team eliminates all the opponent’s cups. The other group gets one last chance to prove themselves. It is known as the Redemption. They shoot until they miss. If they are successful, then the game goes into overtime. Otherwise, you win the game. However, it depends on you whether to add this rule to the game or not.

The conditions for overtime include:

Some rules you need to keep in mind are:

After winning the game, the winner can give a penalty to the losing team. It depends on you, so it can be anything. However, you need to decide before playing the game for fair gameplay.

Also, remember to clean the ball and cups before playing. You need to think about your hygiene as well. Safety and health come first.

Following are some variations of the game. You can also say them as additional rules. However, it depends on you whether to add these or not when playing. If yes, then make it clear at the beginning.

Are you excited to add these additional rules to your game?

Pretty simple and easy to play beer pong drinking games, right? In this game, what matters most is your aim and accuracy. If you have these traits, then you will be unbeatable. However, luck also plays a crucial role.

Have a friendly competition and make your gatherings and parties the best ones of your life. Have fun playing it. But remember to drink responsibly.

Are you ready to play beer pong drinking game?