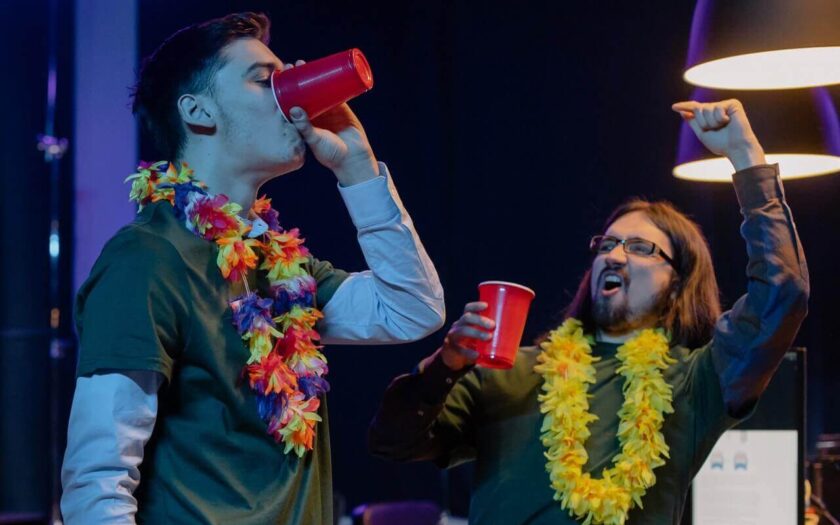 Let’s be honest. How many times have you been to a party only to be bored? If your answer is many times, then it is time to step up and make your gatherings entertaining with baseball drinking game. As its name suggests, it is similar to a real baseball game with a twist of alcohol.

It is a mixture of beer pong and flip cup drinking games with the rules of real baseball. The rules are simple since you already know about the actual sport or have seen it. It is a thrilling game to play with your friends and family.

So, are you ready to play the baseball drinking game?

What do you need to play the baseball drinking ball?

You don’t require much. You only need

First, divide players into two teams. Both groups must have an equal number of members. Every individual stands behind the bases of their own. The fielding team will have a catcher to catch the ping pong ball to make the batter out.

Note: If you have more players, you can have more than two teams. Then you can play friendly matches to decide the ultimate winner, like a qualifier round you see in actual games.

Now, place four cups at each end of the table vertically. There shouldn’t be any gap between them. These cups denote the points: home run, triple, double, and single.

Then, add another three cups each at the edge of the table. These are known as the base: first, second, and third. And there should be enough gap between each cup. These are used to get points and flip the cup when stealing the base.

See the image below for a better understanding of cups’ placement.

How to play the baseball drinking game?

Like the actual baseball game, there are two teams. One is a defending team, and the other is a batting side. Each squad has three chances to score. Three strikes mean another player from the same group gets to bat. And three outs mean the other team gets their turn to shoot.

However, before playing, you need to decide who goes batting and who does fielding. You can toss a coin for that. If you have other methods, then you are welcome to do so.

After that, set up a role for each player. The members of the defending team have to cover each base.

The game’s objective is to get more points than the opponent to win.

Now, let’s see the other essential rules to play baseball drinking game. They are easy and simple to understand.

The player who shoots the ball is known as the shooter or batter. He/she throws the ping pong ball into the cups lined at the end of the table vertically. He/she has three chances to score.

When the ball goes into the single cup, then the batter moves to first base. If he/she scores a double, he/she advances to second base and third base if he/she gets a triple, likewise.

The player gets one point instantly if the ball goes into the home run cup. However, there is a twist in the game. When a player scores, then the defending team must chug down the alcohol from the cup the ball lands in. But scoring a home run will make the defending team drink content from all the cups. Also, you need to refill the cups after the consumption of drinks.

Note: When a player from the batting team scores double, the defending group must chug down content from the cups above it as well, i.e., double and single. And if he/she gets triple, then the opponent must drink alcohol from the triple, double, and single cups.

Moreover, when a player is at first base, and the batter scores a single, then the former advances to second base and the latter to first.

Likewise, if a player is in second base, and the batter scores a triple, then the former goes to third base and the latter to second base.

These are the ways to advance to the bases.

Now, let’s see how you can get the batting team out.

There are four different ways a player gets out.

Ways to get strikes:

It is also another way to advance to the base. This is where the Flip Cup drinking game comes to play.

There is only one situation where you can steal a base:

To steal a base, you need to drink the alcohol from that cup first. For example, if you try to get to the second base from the first, you should chug down the content from the 2nd base cup.

Then, you should put the cup on the edge of the table. It should be placed in such a way that half part of the cup is on the air. Now, using your finger, flip the cup by hitting the bottom of the cup. And it should land upside down correctly to steal a base.

Note: The player can either stop or continue to steal the base. If he/she decides to advance, then he/she has to follow the same rule again: drink alcohol and flip the cup.

However, don’t think you can easily get to steal the base. The defending team can stop you from doing it. As soon as the batting group tries to take the base, the defending side can challenge them. The same rule goes for the opponent: drink alcohol and flip the cup.

If the defending team is successful in flipping the cup first, then the batter is out. Otherwise, he/she advances to the base.

Getting points is easy in the baseball drinking game. Is it? However, it depends on your skills and accuracy to throw the ball.

There are two ways to get points:

The team that scores more points than the other is the winner. You can penalize the loser team if you wish. It can be anything but make sure it is funny and others aren’t harmed in any way.

Take turns playing. You can set up a time for each team to get the turns or play according to innings.

You can call these extra rules or variations of the game.

If you want to try similar drinking games, then check out:

You can also check out this video to better understand the baseball drinking game.

This is how you play the baseball drinking game. Pretty interesting, right.  Any party and gathering can be entertaining and exciting if you play it. So, go and have fun playing with your friends and family.

So, how excited are you to play the baseball drinking game?